-Delay
Specifies any delay to introduce when starting the display software. This option must be followed by a number, specifying the delay in seconds (see illustration above). This is useful in cases where other programs or computer functions may need to be fully started before WATCHOUT can start reliably (see “Auto-Starting WATCHOUT”).

-NoLogo
Suppress the WAT CHOUT logo normally shown together with a progress bar when updating shows or transferring media files. With this option, the display software will hold whatever is on screen during such operations, hence providing no on-screen feedback on the progress. Progress bars will still be shown in the Stage window of the production software, though.

-ShowsPath
Specifies the location of the “Shows” folder, which in its turn contains all the shows that have been transferred to the display computer. By default, this folder is named “Shows” and is located in the WATCHOUT installation folder. In some cases, you may want to locate this folder elsewhere, such as on a separate drive. If so, use this command line option to do so.

Specify the path to the desired location after the -ShowsFolder option, separated by a space. Remember to put the path inside double quotes if it contains any spaces.

You can pass the name of a file as the last item on the command line. Note that such a command file name is not prefixed by any option name. Remember to enclose this path in double quotes if it contains spaces.

NOTE: By default Windows hides the file extension of most files. Hence, the name of a script may appear as “StartWO” rather than “StartWO.txt”. The same applies to most other files. Use the DIR command in a command line window to see the full file name.

If you specify just a file name, without an absolute path, WATCHOUT will look for this file in the WATCHOUT installation folder. The example below specifies a file named “StartWO.txt”, located in the folder named “Mike” at the root of the system drive. 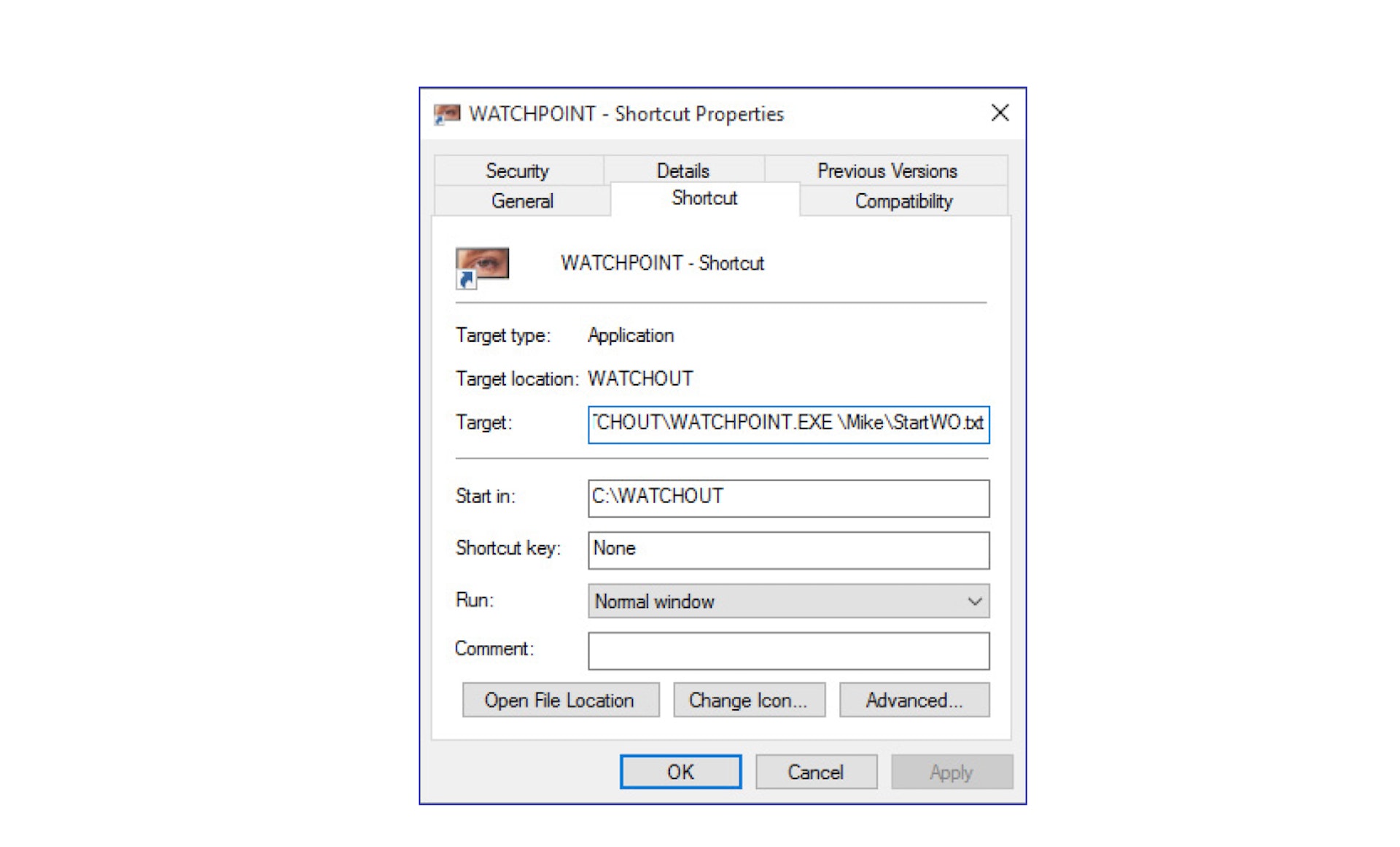 The content of this script file follows the same syntax as described in the chapter titled “Control Protocol”. Here’s an example of a valid command file.

A command file that displays a message after starting WATCHOUT.

You can put comments inside the script file, if you want. Start each comment line with a semicolon. Comment lines are ignored by WATCHOUT.

Default Startup Script
By default, WAT CHOUT always looks for a file named “autostart.txt” inside the WATCHOUT installation folder. If found, and no explicit file name was specified on he command line, any commands found in this “autostart.txt” file will be performed. The main purpose of this file is to perform some configurations on Dataton media servers, but it can be used on any display computer, if desired.

You can edit this script either by locating it inside the WATCHOUT installation folder using File (Windows) Explorer, or by choosing “Edit Startup Script” on the File menu of the WATCHOUT display software, accessed by pressing Ctrl-W while the display software is active.

HINT: You can edit this file from the production computer, in case you don’t have a keyboard connected to the display computer, by using the Remote Access command.