Following the success of its dancing robot exhibit in 2016, Vestel decided to pull out all the stops for its 2017 booth at IFA, the number one event in the European consumer electronics and home appliances industry. The resulting moving 28-screen WATCHOUT show, dubbed "Eye-catcher One", stopped visitors in their tracks – and served as a dynamic demo of the company's consumer displays!

Going back to the drawing board for the Vestel booth at IFA 2017, designer Ronald Costeris created a dynamic 28 rotating video screen display with 16 pieces of 65-inch consumer displays and a dozen 55-inch consumer displays positioned as a statue. The creative team then joined forces with an industrial automation company to design a technical plan to ensure flawless performance during the six-day event.

Twenty-eight AC servo motors provide rotation with special gearboxes controlled by Modbus drivers that were developed by Hugo Janzen, Hugo Janzen AV Projecten. Medialon Manager is employed for overall control and to edit variations in speed and position. Hugo prepared hundreds of tasks to ensure maximum flexibility for the choreography, designed by Alex de Boer. At the end of the production process, Floris Porro ensured exact synchronization with an intelligent motion tracking method. The content for the 28 video feeds is handled by Dataton WATCHOUT running on seven rack media servers.

The end result? Take a look at the video and enjoy! 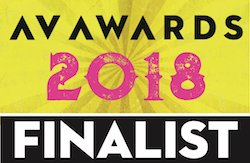 Click here for more cool stuff from the 2018 IFA show