The Dataton stand at Integrated Systems Europe will highlight two brand-new additions to its range of media servers and feature Hako, a 360-degree projection-mapped sculpture, created by BARTKRESA studio.

Dataton continues to enhance its range of media servers with the addition of notebook-sized WATCHPAX 42 and the WATCHPAX 62 series. This latest generation of powerful media servers are sleek on the outside and smart on the inside, with a compact form factor for easier handling and deployment. Both models offer a strong feature set designed for optimum performance with Dataton’s award-winning show composer, WATCHOUT. 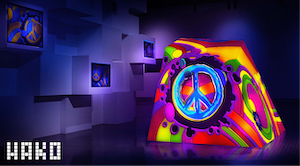 Dataton is proud to showcase Hako, a 360-degree projection-mapped sculpture, created by internationally renowned BARTKRESA studio. Hako is a pop-up experience for artists around the world and the content developed for ISE reflects the community aspect of the project. Behind the scenes: Dataton WATCHOUT and WATCHPAX media servers.

Talk to an expert

The Dataton stand will be staffed by product experts from local partner InWO, Barcelona, Dataton HQ in Sweden and international partners. Additionally, product and case presentations will be held daily. For users wishing to find out more, Dataton Academy training is scheduled at various locations, including Barcelona in June.