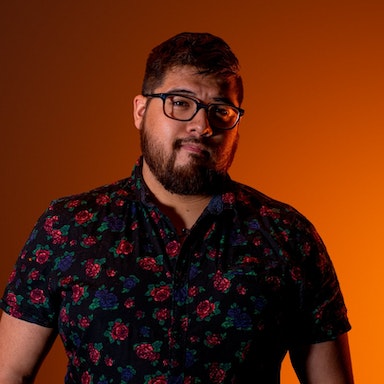 Daniel Cariño is a WATCHOUT expert from Show Sage, Dataton's Partner for North America. Before joining Show Sage, Daniel was a freelance programmer and content creator specializing in motion graphics for live performance, broadcast, and film. He started using WATCHOUT in 2012 at Arizona State University where he graduated 2014 and continued to work in the first video fellowship at Oregon Shakespeare Festival using WATCHOUT on 6 productions and invited back to as a guest artist to assist for 2 more productions as a content creator. His first show Honky at San Diego Rep was filmed for PBS’s Pilot for OnStage in America in 2015. Daniel has over a decade of graphic and motion graphic design experience and as a WATCHOUT programmer/designer working on small- and large-scale productions throughout the US.

In 2018 Daniel joined the Show Sage team for marketing, tech support, and assisting with the Dataton Academy classes. Daniel has a passion to continue to experiment with technology in live performance from theatrical to corporate productions. When he's not working with WATCHOUT, by designing booths, shows, or experimenting with features, he can be found brushing up on design trends, researching new technologies, streaming PC games on twitch, or attending local meetups with various gaming, design, and LGBTQ+ communities in the Chicago area.